Inspiration itself is a problematic concept because we tend to regard it as the starting point of our story process. Inspiration, however, does not provide an inherent narrative. What is does provide is the desire to pursue a feeling of engagement. This is why inspiration is so important to the process of engaging other people in your ideas. Inspiration is not voluntary – we are inspired by external impressions and experiences, which is why we can inspire others, but it’s very difficult to inspire ourselves.

However, while we’re taught to believe that inspiration is a found article, creating and connecting ideas is a skill that can be honed, and “inspiration” is just one of the components. Developing ideas is like mulching the garden in your brain. It’s not an aesthetic process, and for the cold season you’re not going to have much more than wet dirt. But, as with the subconscious, it’s what happening underneath that’s going to end up paying off later. And there are some proactive ways to help that process along.

Every time you come across something that piques your interest, make a record. Keep a journal, even if all you use it for is notation. Always have it on hand, give yourself permission to log and forget, and then you always have something to consult when you’re feeling blocked.

When you begin to explore a topic, aim for specificity. Identify what’s most interesting. Try to avoid sweeping subjects like “The Cold War”. Try instead to find more digestible components, such as the Berlin Wall, the Gulag, Estonia. The encyclopedia of the human experience is a buffet. Pace yourself, but don’t stop feeding your curiosity.

Diversify your sources. Yes, there are movies and books, but there are also talks, articles, podcasts, radio shows, magnet poetry, interesting graffiti, people in your neighbourhood, plaques in your city, William Shakespeare, Netflix documentaries, so on. All things and places created by humans have human stories, and humans also have impactful relationships with the natural world. Investigating the human influence on these things and places, and on each other, is critical for inventing your characters.

Remember that imagination and inspiration are dependent, and often non-linear. Imagination is a constructive act, while inspiration is something that usually impacts us without our volition. Imagination, it’s important to note, is something you have the ability to control. Inspiration can appear at the beginning of your process, or as the result of a scenario or character you’ve imagined. These last are my favourite moments, and they tend to be the result of the amount of imagination I’ve put into that character.

Inspiration lends itself to tone, feeling, world, mood, while investigative imagination is the main engine of character. There’s obviously a lot of overlap, but because complex characters require involved formation, inspiration is usually not going to offer much more than a detail or a template. Inspiration creates texture, absorbs and refracts compelling performances or narratives, but it is not a decision made by you, but rather your passively experienced perception.

The best way to knit the two functions together is to start with questions (what, where, when, why, how are safe bets) and begin to build a narrative bridge between the thing you can’t control, (the inspiration that *happens* to you) and the thing you do control, which is how hard you use your imagination or investigative skills.

When I’m at a loss for ideas, I perform a little exercise for myself. I have a coin, a Hellenistic tetradrachm from just over 2,000 years ago, images of which I’ve included. Aside from the fact that it’s pretty, and cool, it’s also an object that is deeply associated with human story. Coins are very good for this exercise for that reason, because they are narratively connective over time and space. 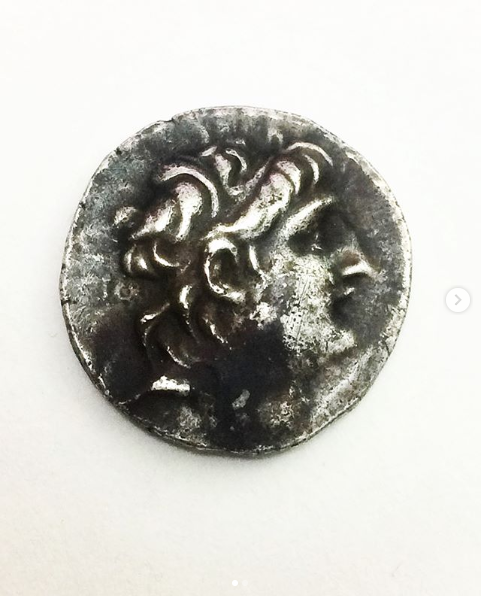 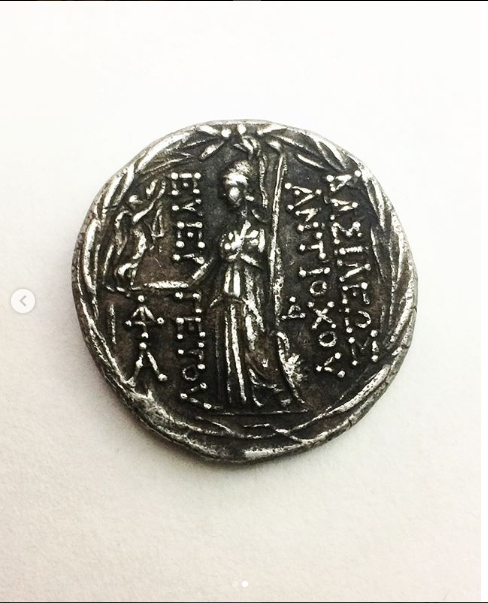 So how do I pull a story out of this object? I start by asking questions.

Who is the emperor on the front, and what civilization did this come from? Who are the goddesses on the obverse? (Antiochus VII Sidetes, Seleucid Empire, Nike & Athena)

When was this coin struck? Who minted it? Who mined the silver?

What was this coin used to pay for? Food? Goods? Bribes? Murders? Prostitutes? Sacrifices? (probably all of them)

Where was it accepted as currency? How strong was it?

Who’s touched it? Where was it found? When and by whom?

Some of these questions I can find the answer to through hard research. Some of them I have to invent. In this way, I’ve taken the object of my inspiration, turned it into an object of inquiry, which I will use my imagination to investigate. Somewhere in the guided free-association process, ideas will form. Characters will take shape and I will, in effect, have transferred my perspective into what I believe might have been their experience.

“Thinking outside the box” is a common cliche, but I don’t think it’s very helpful. Creativity happens within limitations, just as characters have to learn and adapt to get past obstacles. All of writing is and should be treated like a discipline. If you impose a specific task on yourself and you practice it often, eventually it will come reflexively. In the meantime, remember that this whole process I’ve described here is the underwater part of your iceberg; the actual script is just the tip of it. Don’t consider time you’ve spent on your ideas as wasted — they’re the most important part of your writing. Even if they’re never seen, they will be felt.

The End of The World – Nobody’s Fine