A lot of people struggle with figuring out how to make their pages communicate the scene inside their head, and this is one of the ways of extracting inspiration. I think about the nature of inspiration a lot. I’m constantly inventing and refining ways to curate it, but I think it’s ultimately all variations on the cut-up technique. You encounter influences, you take pieces from them, you find a way to process them. Or maybe, like me, you end up putting them in a drawer for awhile, only to find it’s something different when you open it again.

Sooner or later you discover a character, and you fall in love the way you do when you meet someone who feels like they have a piece of you in their soul. All of them do, the best and the worst of them. But it takes a lot of time to learn about the pieces of them that aren’t you, and that’s where invention becomes a real struggle. I try, when writing, to live inside my characters beyond just representing them on the page. I don’t just need to know what they think, but how often they blink, the way they move, whether they’re in pain, the space they take up in their world.

What I describe here isn’t a method so much as a practice. More than a habit, less than a religion, but it’s my favourite way of digging for the story. Every time I find a cheap source for notebooks I’m delighted, because I go through them at an astonishing rate, and sometimes I never open them again. 90 percent of what I put in them does not end up in my outline or script, but the freedom of being able to change my mind constantly — to write in shorthand, always forward, never rewriting, just filling up pages — is one of the best ways to throw inspiration on the page and see what sticks.

It is, for some reason, easier to hit flow and discover surprises when I’m writing messy. Surprises are always the signal that I’m on the right track, that the inspiration is starting to breed and refract through my intentions for my characters, and my stories.

I think the notebook has been mistaken for something sacred. Because you’re altering a physical object, you’re somehow supposed to make sure everything you enter into it count. I use dollar store notebooks and I rip through them. For the people who sit down, stare at the screen and feel confusion and inhibition as they try to bash out a story in their screenwriting software, it’s usually because they’ve never been taught how to go back to the free-form process.

This is, essentially, the iceberg beneath the surface. I will use some of this material on the final page, and some of it I will never allude to. But when I start typing, I will try to write with the understanding that because I’ve studied it, scratched it out, amended it, it will filter into the characters and the scene. 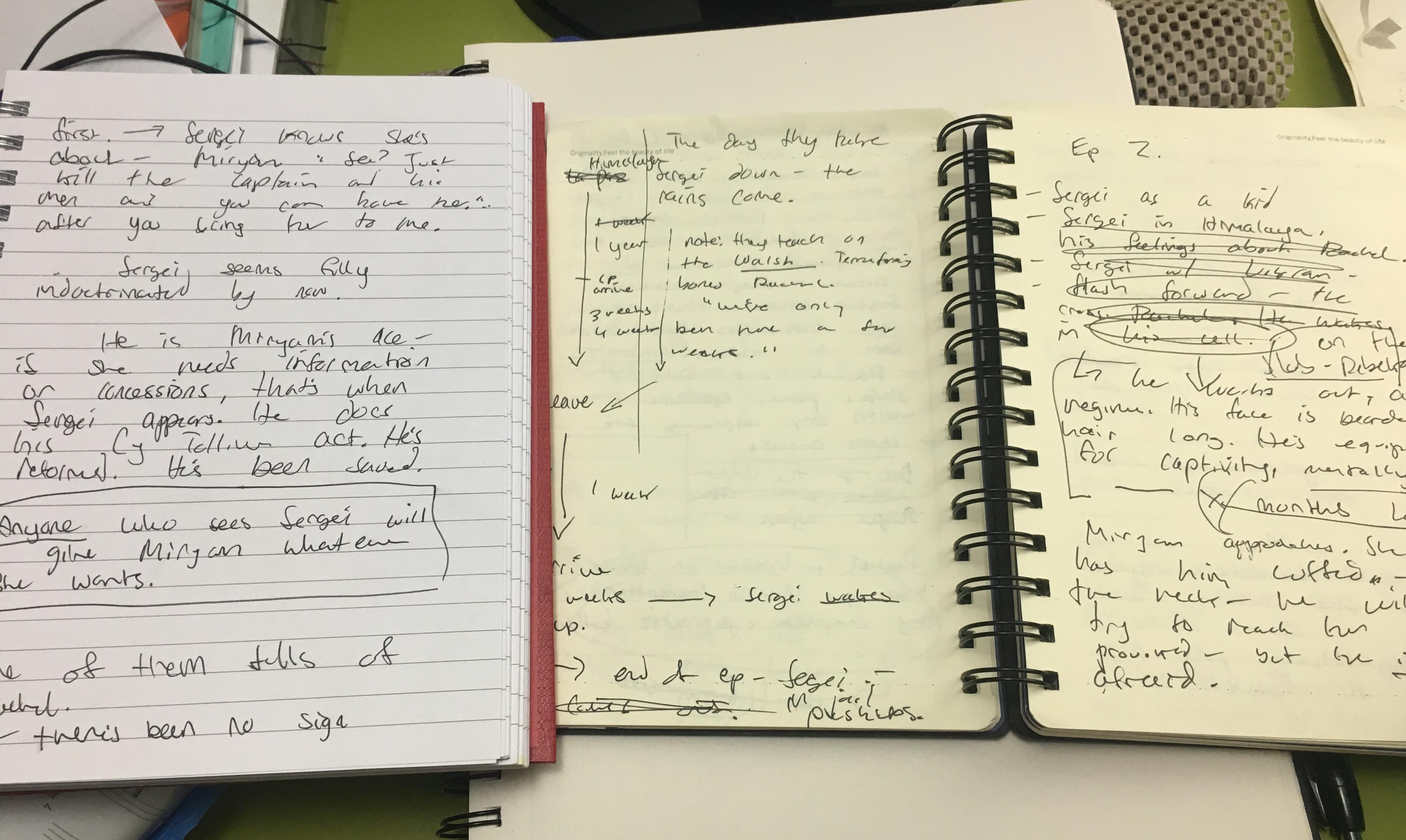 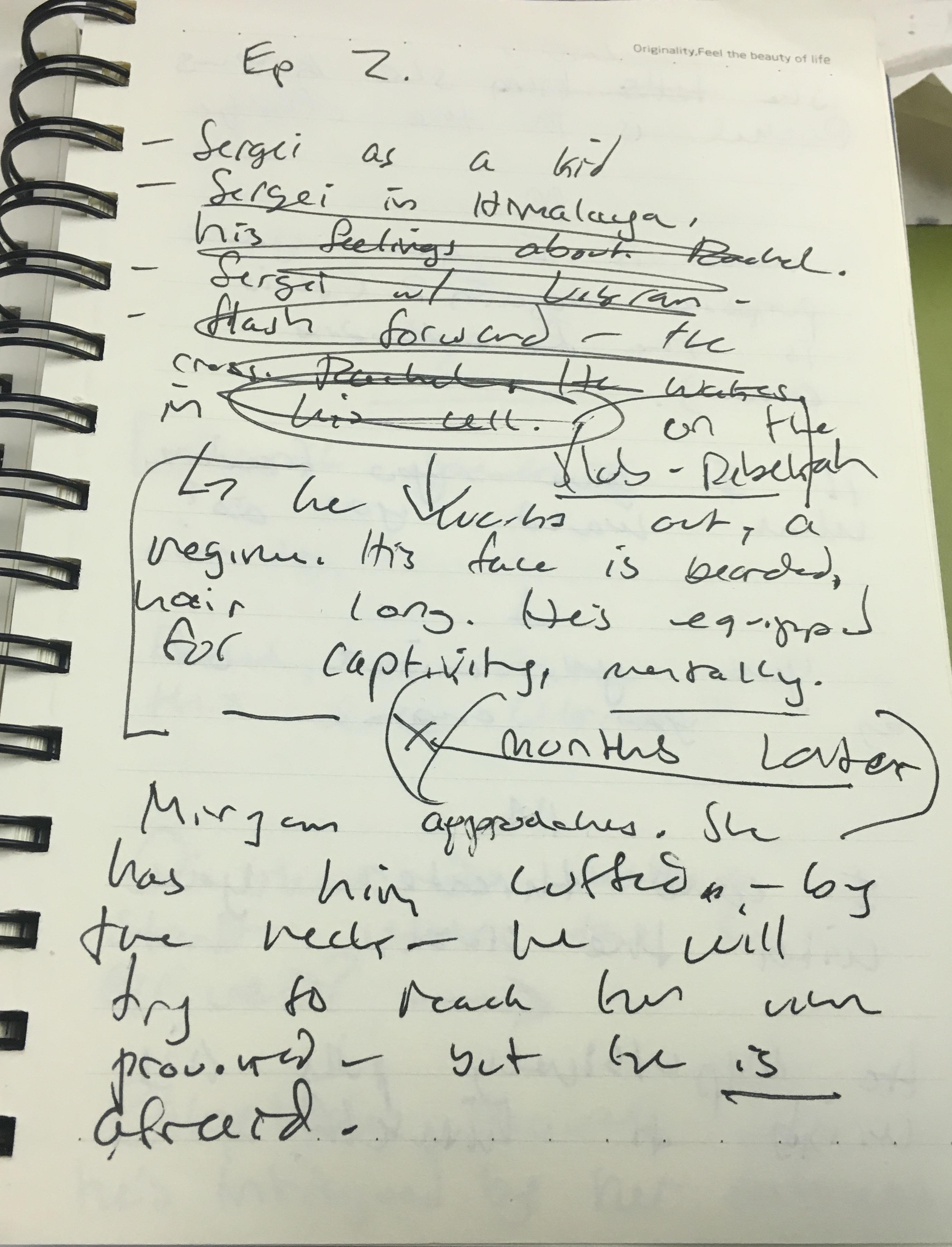 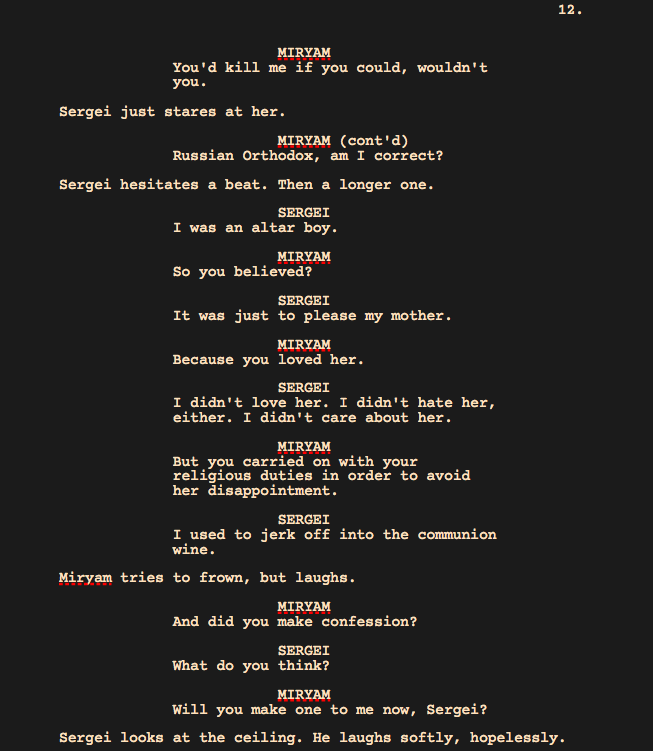 I may change all of this. For instance – in the previous pages I show that Sergei is weak and lying on a table, rather than physically capable. I might move the scenes around, cut some of the dialogue, have them communicate more through movement than through words. But the point is, I’m always tethered to their inner worlds, and those inner worlds are complex and non-linear. Some of it’s intention, some of it’s texture. But all of it is ultimately about what they want from each other — and where those wants turn into conflict.

It takes a long time to embrace trial and error, partly because we’re taught that progress is linear. Teaching yourself how to instantly recognize when an idea isn’t going to work, and moving on to the next one is probably the most important and least discussed component of writing discipline. If you find that you’re stuck, that your characters don’t have a natural path, or they don’t feel real because they lack the complexity to be self-intuitive, take a step back. Grab a notebook, or a white board, or any writing medium, and start creating some chaos. Ask questions. Make side notes. Cross things out, circle things. The vital facts of your universe will eventually make themselves known to you, and you’ll develop an instinct for spotting what you don’t need.

Trauma as the Female Genre